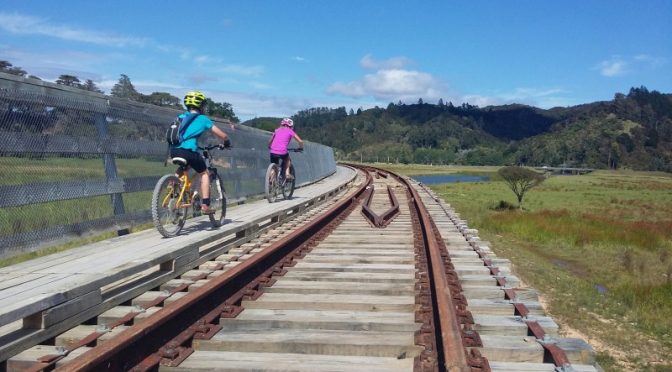 We had ridden the Opua to ‘the bridge’ section of the Twin Coast Trails once before but we had heard the bridge was open for the summer so we were excited to be able ride over the bridge and make it to Kawakawa for a coffee.

It was predicted to be a 29 degree day so we set out early, OK early-ish we are on holiday after all. Opua harbour was looking stunning as we drove to the start of the ride. The carpark for the bike ride already had a few cars in which was good to see.

The tide was in and we were pretty much instantly treated to lovely views of the Kawakawa River. The ride is on gravel that has been put down over old train tracks and is relatively flat and an easy ride. When we are riding other trails with the children we stop to give them a rest every so often but the only reason we were stopping was to enjoy the stunning views.

Usually from the Opua end you can only get to the bridge before Kawakawa ( just short of a coffee stop ) but over the Summer period ( of 2017 ) the council has got the bridge to a safe standard for people and their bikes. Thanks Far North District Council!

Not only does this ride have a bridge, its got a tunnel as well. Just short enough that you can easily see all the way through.

Usually I don’t enjoy riding over bridges ( think Timber Trail suspension bridges and the Old Coach Rd viaduct ) but I really enjoyed riding over this one. Maybe it was the thrill of knowing that its only open for a short period of time.

From there it was a short ride to Kawakawa for a coffee and a refuel for the kids and as an added bonus we go to see the steam train going through town and coming back again. If you haven’t checked out the Hundertwasser Toilets they are well worth a visit as well.

The return ride was just as enjoyable and an easy 11km return ( we rode 22km in total ) without so many stops for photos.

This is a great ride to do with kids or are enjoying holiday mode a little too much.

As we were leaving there were people about to do the rides with e-bikes.

Check if the bridge is open. We found out the bridge was open on the Bay of Island VIntage Railway website and at that stage it was open until the 8th of February 2017.

Sharing family fun & adventures from the kitchen to the great outdoors